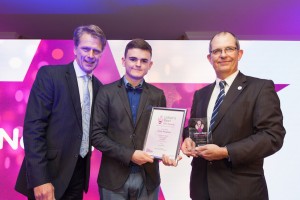 It was a night to celebrate for Conor Naughton who won the young achiever award at the 2015 Luton Best Awards held at the stunning Warren Weir at the Luton Hoo. Conor won the award for his tireless work for Diverse where he has volunteered since 12. Working tremendously hard to make media and culture a big part of the wider community in Luton and beyond.

Conor has shown a big passion for helping others via the use of one of his loves the arts and in particular media. Conor has played an integral part of the NEET training at Diverse FM and has dedicated a lot of time to fundraising for local charities including Age concern and Luton food bank.

Conor told us: ‘It is an absolute honour to be recognised, especially amongst so many other outstanding groups and individuals it was truly an honour to be a winner.